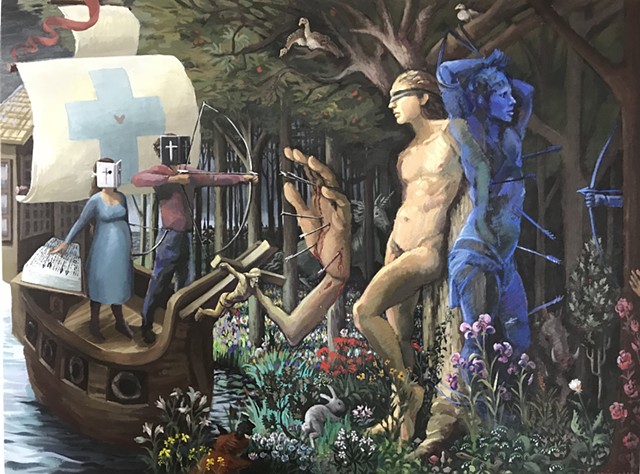 A year ago, I began a series of paintings documenting my experience of identifying as a gay individual and my relationship with my church communities and beliefs. It has been a challenging experience mixing these two seemingly opposing worlds. It was a struggle being raised in a conservative branch of Christianity that may not have had the tools or knowledge of how to handle my sense of sexual orientation. Rather than acceptance, grace, or even outright condemnation, folks hinted that I should grow up to live a quiet and celibate life. I did that, for many years, and it took me years to untangle the variety of opinions that have shaped my sense of self and understanding of who and how I should be. My faith community made me feel like an outsider, having to keep myself a secret, something to be ashamed to show the world. Now I am celebrating and blossoming into myself.&#8232; &#8232;The goal of my work is to connect with people through sharing my story, which documents this process of vulnerably living out my truth in public.&#8232; This painting was created as a reaction to a letter I received from a friend that was disagreeing with my decision to live “a gay lifestyle.” Four pages of condemning theology, misusing scripture, and hurtful statements on my life and my personal relationship. On this journey I've learned it's important to have these conversations, but not at the expense of our human identities.

To me this painting is about the injustice of people throughout history crusading into other people's safe spaces and misusing fragments of the Bible to justify harmful actions, behaviours, and habits toward others mainly because of misunderstanding and their misuse of scripture.

In this painting I reference Saint Sebastian, a Martyr from the Catholic Church in 1700s, and The Hunt of the Unicorn Tapestries from 1505 held at the Closters Museum in New York. I referenced them because of their display of persecution and resistance.

Saint Sebastian is a symbol of resilience because of his miraculous escape from execution in Rome (288 AD) being bound and shot with arrows and then nursed to health by a group of holy women. He became an icon for hope of healing during the plague in the medieval ages and was similarly used during the height of the AIDS epidemic and since then has became a gay icon.

Also, referencing “the hunt of the unicorn” tapestries, I wanted to use them as a reference not only for the vivid visuals but also for their layered stories of pagan and Christian symbolism particularly for their portrayal of the death of the unicorn as the passion of Christ.

The God I’ve come to understand is love.